If you haven’t yet read about the first two days of our trip, in Dublin, you will want to here.

We woke up our 3rd morning in Ireland raring to go.

Tripmasters was pretty smart to book our rental car at a Sixt a little way out of Dublin, so that our first forays into driving on the ‘wrong’ side of the road were on small, rural roads. When I say our, I mean Kendel. He did ALL the driving, ha, ha! We took a cab out there, picked up our car, a little silver Renault Clio, and we were off. But not until Kendel had been warned plentifully (with great appreciation!) to keep his right knee as near the center line as he could. We thanked our lucky stars for the GPS over and over and over!

Don’t even consider NOT getting the GPS unless you like getting yelled at by your partner for the duration of your trip, or if you are the driver, unless you like yelling and swearing and driving aimlessly on narrow, poorly-paved cowpaths while your reservations and attraction tickets expire unused on the back seat. Even if you like yelling and swearing,  get the GPS. It could save you serious hypertension and even heart attack. And you will still have plentiful opportunities for yelling and swearing as you have to drive into the bushes to avoid oncoming traffic on said narrow, poorly-paved cowpaths, and as you have to navigate the cowpaths alongside stubborn livestock on the edge of a cliff, and especially as you try to find hotels lacking in signage, accessed only by a maze of one-way streets. The GPS probably saved our marriage and possibly saved our lives. Note: if you book GPS upfront with Tripmasters, it will cost a great deal less than if you book it last minute at the rental desk.

We drove through fantastic forests with lakes (called loughs, pronounced locks) around every corner and were astonished to see castle ruins right off the side of the road, in people’s pastures. How special must they feel to have castle ruins in their pastures? I kept making Kendel stop so I could take pictures until I realized that ruined stone castles, towers, and churches were everywhere (there are estimated to have been as many as 3500 on this small island) and so many people had them in their yards and pastures that it probably felt commonplace rather than special. Though I still imagine kids playing in them! My kids would give their right arms to have a castle to play in right in our backyard! Can you believe that by the end of two weeks, I was no longer photographing all the ruins?

Our first destination was Glendalough (also free with your OPW card), which is the ruins of a 6th century monastic settlement. The valley was incredibly beautiful, the ruins, which are in fantastic shape considering their age, were amazing, and the surrounding cemetery was absolutely incredible. We delighted our five-year-old by texting her photos of the tower and telling her we had found Rapunzel’s tower. 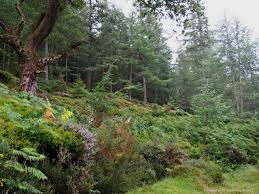 But my absolute favorite part of the settlement we found by accident. We had a picnic at the park near the upper lake, decided to walk around and we found St. Kevin’s church. It was just a short walk, but this small ruin, devoid of tourists, felt magical. I can understand St. Kevin wanting to live alone in that spot. It could have been straight out of a Lord of the Rings scene, with the trees and rocks all dripping with greenery. When you visit, be sure you save time to walk around the lakes, otherwise you will miss the best parts! 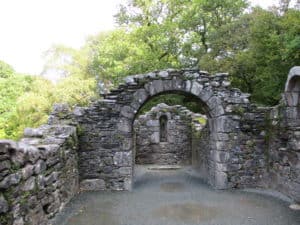 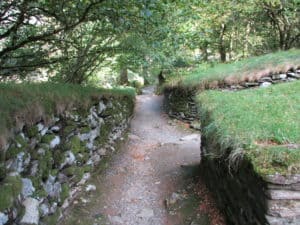 I could post pictures of Glendalough all day and still not be able to adequately convey the ancient, holy beauty of the place. You will just need to visit yourself!

We drove to Waterford from Glendalough. I am used to driving in the vast, empty western United States, so it was astonishing to me that our destinations were all so close together. Glendalough was just over an hour from Dublin, and Waterford was only 2 hours beyond that, on Ireland’s Southeastern tip. The drives honestly seemed even shorter than they were because there was just SO much beauty to take in!

We arrived in Waterford, Ireland’s oldest city, founded by the Vikings way back in 914 AD, around sunset and took a quick walk. We stayed at the Waterford Marina Hotel, right on the harbor, with beautiful views, and almost next door to Viking Triangle, Reginald’s tower and a whole line of fun pubs. 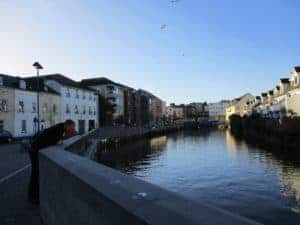 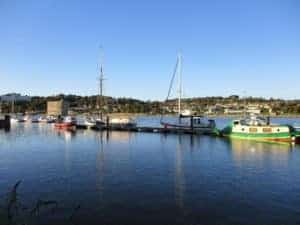 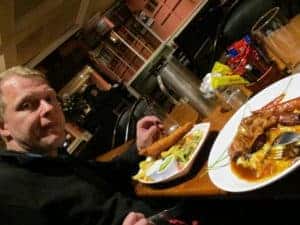 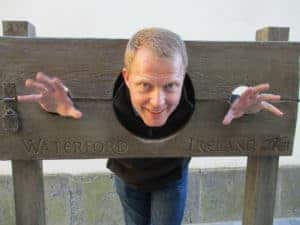 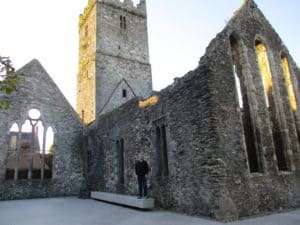 By noon we were headed to Killarney by way of Rock of Cashel, which is a spectacular group of 12th century medieval buildings set on a ragged limestone outcropping (legends claim the giant rocks were thrown by Satan when he was banished to a cave by St. Patrick) reputed to be the site of the conversion of the King of Munster by St. Patrick in the 5th century. Like all of the other ruins we toured, the roof of the cathedral had long since been removed. We learned that Irishmen would remove roofs from buildings they owned to avoid paying taxes on them. The stone buildings were still in remarkably good shape, though.The hall of the Vicar’s Choral has been carefully restored, and Cormac’s chapel (which looks light tan–different from the other buildings) had just finished restoration when we were there, but was not yet open for viewing.

In 1101, then King of Munster gifted Cashel to the church for two reasons. First, his rivals for the kingship of Munster, the McCarthy’s were gaining power and he knew they were planning to take this strategic and symbolic spot, but would be unable to if it belonged to the church because public opinion would oppose them. He would also gain favor with the public and the church.

After 1101 the Rock became an important Christian religious site and the buildings there today date from then forward. The fort was dismantled in order to re-use the stone for the new buildings, the first one of which was the spectacular round tower dating back to 1101, followed by the Cathedral (120-1270) and the tower house castle (you would think a ‘tower house’ castle would be nice, right? After all, it’s a castle. But you would be very wrong! Tour a renovated tower house here) which was the archbishops’ residence and then the 15th century Hall of the Vicar’s Coral, a place of residence for the choir. The site, which was windy, desolate and not particularly comfortable was finally abandoned by the archbishop during the 16th century, at which point it began its descent into ruins.

The Hall of the Vicar’s Choral has been carefully restored and is pictured below. Cormac’s Chapel had just undergone extensive restoration, because it had been water-damaged as its mortar failed, when we visited in October 2017.

Killarney (Muckross House, Ross Castle and the Ring of Kerry)

Rock of Cashel was definitely one of the highlights of our trip! Because it was so interesting, we spent several hours longer than we planned and we could have spent longer, exploring nearby Hore Abbey. So we drove in to Killarney pretty late.

Check out the rest of our adventure in Ireland:

The best way to spend 2 days in Dublin

What you must see while driving from Galway to Westport

Top 7 things to see around Sligo

What NOT to do in Northern Ireland 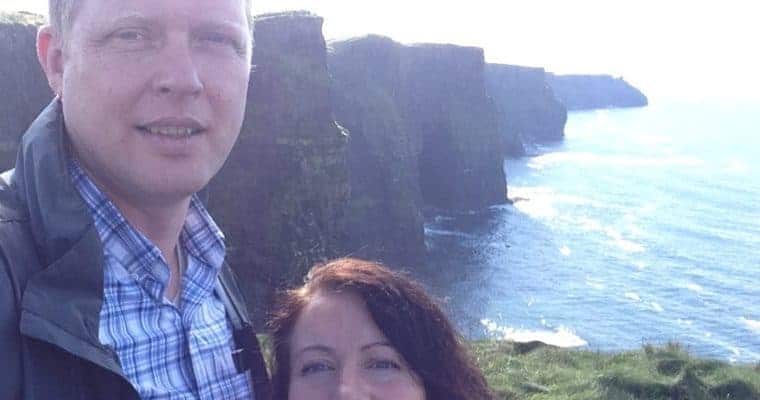 48 Hours in Galway: 5 things you MUST see

We’ll get to our 5 top things to do in Galway shortly, but first this little diversion is worth mentioning. Sunday morning we said goodbye to Killarney and headed North to Galway. On the way we visited an LDS branch in Tralee to participate […] 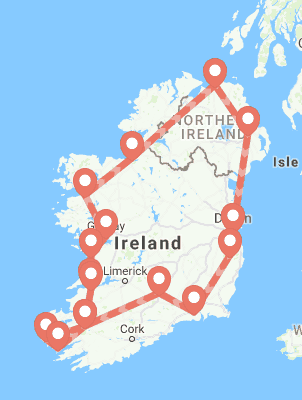 Ireland Road Trip Itinerary   I think I’ve created the perfect Ireland itinerary for the first time visitor who wants to see as much of the island as possible. The good thing about this itinerary is that you can cut out whatever you want and […] 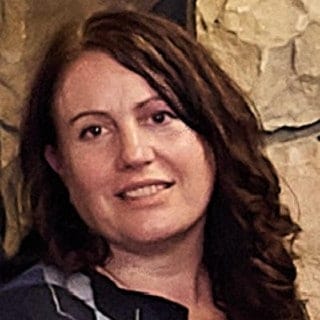